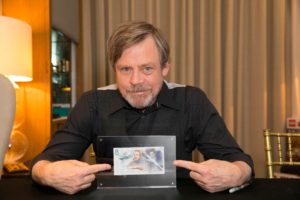 UK charity Together for Short Lives today received one of the largest single donations in the history of the organisation after the auction for the official Star Wars: The Last Jedi commemorative note closed at a staggering £186,754. The money raised by the note, created in partnership between Disney, De La Rue and the GREAT Britain Campaign and auctioned exclusively on eBay, will help more children with life-threatening and life-limiting conditions receive the very best of care.

“The generosity of Star Wars fans around the world has been overwhelming and this donation, one of the largest single donations in our history, will make a huge difference to the care we can provide to the 49,000 children and young people in Britain living with life-threatening or life-limiting conditions. We’re hugely grateful to Disney, De La Rue, The GREAT Britain Campaign and eBay for their support in this unique project and it’s a fantastic example of the special relationship between the franchise and the UK. The money raised could provide over 7,400 hours of specialist hospice care; giving families precious moments together and allowing parents the rare opportunity to just be mum and dad.”

The commemorative note was created using the technological and design expertise of British company De La Rue, a company that provides currency to over two thirds of the world’s countries, including the United Kingdom. It forms part of a special initiative between Disney and the GREAT Britain Campaign to celebrate the 40 years of British creativity behind the Star Wars films.

100% of the money raised from the commemorative note will be donated to Together for Short Lives, on behalf of Star Wars: Force for Change. Together for Short Lives, a UK-based charity, supports children’s hospices and all children with life-threatening and life-limiting conditions and their families. Star Wars: Force for Change, a charitable initiative from Lucasfilm and Disney, harnesses the strength of Star Wars to empower and improve the lives of children around the world. This Christmas, The Walt Disney Company UK has combined forces to launch a broad campaign across its range of businesses and its partners’ platforms to raise money, awareness and to create magical memories for the children under hospice care.

eBay was the exclusive home for the auction which saw the limited edition notes available at a fixed price of £100 sell out within just fifteen minutes. The auction lots, which closed at 8pm on Monday 18th December, attracted over 2500 bids with winners from Australia, China, Germany, Italy, South Korea, Sweden, the USA and the UK.

The notes were crafted with 100% cotton cylinder mould paper, securitised and printed in De La Rue’s high security proofing department based in Hampshire. They incorporate an original light side/dark side artwork composition and several special features including serial numbers; pattern work of the First Order and Resistance emblems; hidden scenes (discoverable under 365nm UV light); hidden messages in microtext (discoverable with an eye glass); a message in Aurebesh, one of the languages of the galaxy; and the signature of Director/Writer Rian Johnson. The 50 unique, premium notes include an intaglio (a raised, hand-engraving of Rey) and each have a unique, sequenced serial number.

It’s incredibly exciting to be part of this one of a kind initiative to mark the release of The Last Jedi and for such a fantastic cause.” says the film’s director Rian Johnson, whose signature appears on the official note. “It was a joy filming in the UK and working with a British crew and I’m delighted the GREAT Britain Campaign and De La Rue are celebrating this with the commemorative note.”